“From Zucotti Park to Lincoln Center – my career is definitely on a trajectory,” Rage Against the Machine guitarist Tom Morello cracked early in his February 16th set at New York’s Allen Room. The Jazz at Lincoln Center venue – in the Time Warner skyscraper, with a glass-wall view of Central Park South – was a counterintuitive setting for Morello’s solo guise: as aggro-troubadour and Occupy-movement champion the Nightwatchman. He sang mostly-acoustic songs of underclass fight, union solidarity and war memorial to a supper-club array of tables in front of the stage and, behind him, a moving cinerama of New York at night more suggestive of a Laura Nyro song. 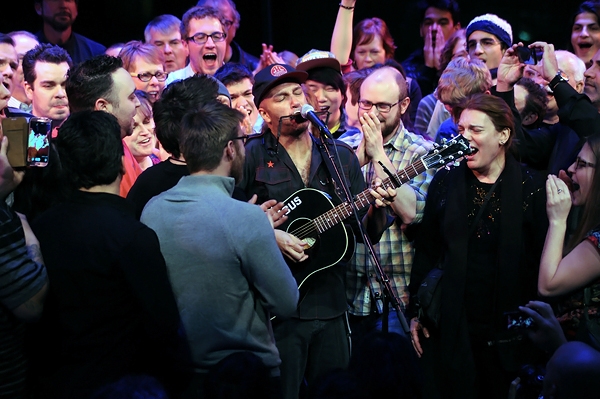 Ochs never made another album; he committed suicide in 1976, ultimately succumbing to alcoholism and commercial rejection. At the Allen Room, Morello noted his own struggle to stay sure and firm in his work. He introduced “The Garden of Gethsemane” from 2007’s One Man Revolution by acknowledging, “For every moment of certainty, there are a thousand moments of doubt.” But none of those cracked through the robust challenge in Morello’s singing or survived the sturdy, elementary fury of his guitar playing and brute, cheap percussion: one foot stomping on a road case. “The streets are paved with gold/But an iron fence runs ’round it/And its iron gate is closed,” Morello sang in the title track from 2008’s The Fabled City – like a man outside looking in and energized by that rejection.

This Guitar Kills Complacency
In that spirit, Morello also played the fully-loaded socialist version of Woody Guthrie‘s “This Land Is Your Land” (with the once-abandoned verses about our common ownership of that land) and plugged in an electric guitar for his now-iconic take on Bruce Springsteen‘s “The Ghost of Tom Joad.” Morello remarked, before the latter, that he is about to join Springsteen’s E Street Band – as a temporary replacement for Steven Van Zandt – on an upcoming tour. “I have to learn 200 songs,” Morello joked. “I only know this one.”

It was easy to imagine Springsteen adding one of Morello’s songs to that repertoire as well. “Black Spartacus Heart Attack Machine,” the opening track on World Wide Rebel Songs, is personal business – Morello’s love song to one of his acoustic guitars – that underscores the strength in numbers that always starts with the power of two (“Yeah, this is my song I’m singin’/Somebody better start countin'”). “Black Spartacus” rocks hard, too. At the Allen Room, Morello chanted the title chorus with a Joe Strummer bite that was fierce and right on its own. But add the rest of the E Street Band and Springsteen’s R&B-preacher fire and you have the stuff that will blow up Australian stadiums. Just a suggestion.

A Job Not Yet Done
By the end of his set, Morello convened his own version of mass action, getting the quietly attentive Allen audience to pogo in place during “The Road I Must Travel” and squeezing half of the crowd onto his small stage for the Guthrie sing-along. “This is democracy in action,” Morello declared cheerfully while admonishing the folks pressed to his shoulders not to “step on my shit” – the guitar pedals at his feet. Yet much of what Morello sang was about democracy imperiled, with implications beyond each specific crisis. “Union Town” is a furious response to the right’s cynical diminishing of organized labor; Morello prefaced the song by thanking the Allen’s union stagehands and the union pilots and baggage handlers that got the Nightwatchman to this gig.

But the lines that stood out in the chorus – “If you come to strip our rights away/We’ll give you hell every time” – summarized our nation’s daily, failing business: the constant vigilance and ethical responsibility that comes with lasting equality. Morello played these songs high above the streets, in a classy space with a breathtaking view of the greatest city in the world. But every breath and burst of guitar gunfire was a reminder of the people, stories and trials in the shadows below – and that they must never be forgotten.