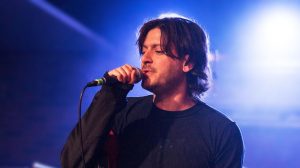 Carl Restivo is an American musician, songwriter, multi-instrumentalist, record producer, and DJ. His abilities as a lead singer and multi-instrumentalist (guitar, bass, drums, and keyboards) have landed him on tour with such artists as: Tom Morello, Rihanna, & Perry Farrell‘s Satellite Party.

Most recently, Carl wrapped as Music Producer on the Netflix film Metal Lords which was released on April 8, 2022. The release of the film was accompanied by the release of the original song, “Machinery of Torment”, co-written by Carl, D.B. Weiss, and Tom Morello which can also be heard throughout the film.

Carl co-produced Nandi Bushell and Roman Morello’s original song “The Children Will Rise Up” which was released in November of 2021 and endorsed by President Obama.

Carl was the production supervisor on Tom Morello’s album The Atlas Underground. The album featured Knife Party, Pretty Lights, Steve Aoki, RZA, GZA, Portugal the Man, Marcus Mumford, Killer Mike, Whethan, Vic Mensa, and Carl Restivo himself on the song “Vigilante Nocturno” aka “Crossroad Blues” which can be heard in the Sony film Fist Fight. He also produced as well as “Lucky One”, featuring K.Flay. Additionally, Carl is Morello’s Music Director and he recently wrapped a domestic and international tour with dates opening up for Muse.

Carl got his start by selling his first track to Xzibit and Kurupt in the 90’s as a kid and cut his teeth working with Wyclef Jean. He helped develop and record Jean’s album, The Preacher’s Son. He and Jean co-wrote the song “Linda” for the record and Carl was one of the featured artists. Restivo also has the distinct honor of being uncredited in playing acoustic (rhythm and lead) guitar on the hit “Hips Don’t Lie” by Shakira featuring Wyclef Jean.

Since then, he has recorded, produced, and written songs with and/or for Tom Morello, K. Flay, Bishop Briggs, Jerry Wonda, 50 Cent, Nuno Bettencourt, Steve Perry, Patti LaBelle, among others.

Restivo is a graduate of New York University and in 2006 he moved from New York City to Los Angeles to work as the Music Director of the (at the time called) Paul Green School of Rockin Hollywood, California at the request of Paul Green himself. He left the school (now called School of Rock) in 2010 after 100 shows and co-founded The Rock School Scholarship Fund, a 501(c)3 charity to pay tuition for financially needy students at qualifying rock music schools.